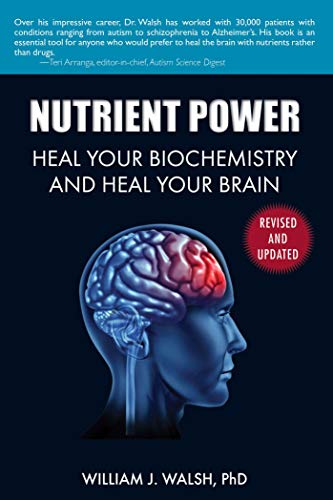 Updated to cover the latest scientific developments, a must-read for individuals, families, and medical practitioners that opens a new door in psychiatric health care. Psychiatry has made great advances in the past fifty years, but it needs a new direction. Today’s emphasis on psychiatric drugs will not stand the test of time. Recent scientific advances, particularly in the molecular biology of the brain, have provided a road map for the development of effective, natural, drug-free therapies that do not produce serious side effects. Psychiatric medications have served society well over the last fifty years, but the need for drug therapies will fade away as science advances. Nutrient Power presents a science-based nutrient therapy system that can help millions of people diagnosed with mental disorders. The author’s database containing millions of chemical factors in blood, urine, and tissues has identified brain-changing nutrient imbalances in patients diagnosed with attention-deficit/hyperactivity disorder (ADHD), autism, behavior disorders, depression, schizophrenia, and Alzheimer’s disease. This book describes individualized nutrient therapy treatments that have produced thousands of reports of recovery. Walsh’s approach is more scientific than the trial-and-error use of psychiatric drugs and is aimed at a true normalization of the brain. Depression, schizophrenia, and ADHD are umbrella terms that encompass disorders with widely differing brain chemistries and symptoms. Nutrient Power describes nutrient therapies tailored to specific types, not umbrella solutions to individual problems, and offers a groundbreaking approach to psychiatric health care. Updates to the paperback edition include sections on nutrient therapies for bipolar disorder, expanded chapters on depression and schizophrenia, and analysis of the latest scientific developments in brain research and advanced nutrient therapies.